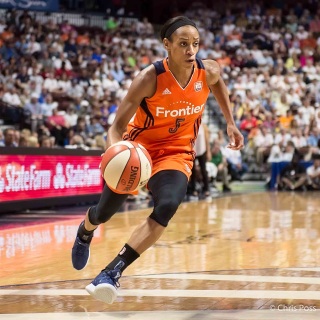 WHAT. A. GAME. On my way out of the Mohegan Sun Arena after seeing the Connecticut Sun defeat the Seattle Storm 96-89, I rode up the elevator to the parking garage with a couple of other Sun fans. I said, “Great game tonight.” They agreed shouting “It was absolutely amazing!”

“The hottest team in the WNBA right now.” is how the Sun is being described these days, and this game certainly showed why.

On this special night with the Sun celebrating their 15th year anniversary, Jasmine Thomas scored a career-high 29 points (4 of 6 from the three-point line) with 6 assists. Alyssa Thomas had a career-high 9 assists while scoring 17 points.

For Seattle, Breanna Stewart and Jewell Loyd scored 22 and 21 points respectively. Sue Bird had 16 points with 5 assists for the game.

Some photos from the game below, or visit the gallery here for full-size images.