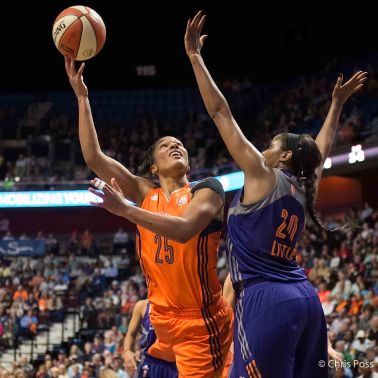 It was a tough game for the Connecticut Sun as their season came to an end with their loss to the Phoenix Mercury in today’s WNBA Playoff match-up. The Sun started the game strong building their largest lead of the game with a score of 37-20 with seven minutes and 33 seconds left in the second quarter. But it was the Mercury who fought back outscoring the Sun in the third and fourth quarters to win the game 88-83.

Two Sun players finished with double-doubles. Jonquel Jones (19 points, 15 rebounds) and Alyssa Thomas (20 points, 10 rebounds) became just the sixth and seventh players in franchise history to record a double-double in a playoff game. Jones had 12 rebounds in the first half alone, setting a new franchise record for rebounds in a half. Four players finished in double-figures for the Sun – Alyssa Thomas with 20, Jonquel Jones with 19, Jasmine Thomas with 15 and Courtney Williams with 10.

After the game Connecticut Sun Head Coach Curt Miller provide the following opening statement: “It is a difficult press conference because I enjoy coaching this team so much that I just wanted the journey to continue this year. While we made incredible strides, we became a little greedy. We wanted to keep advancing and moving on in the playoffs. It was a great game and I am so proud of our team with our start tonight. We had not played a lot of great first quarters as of late, and the team came out focused and with tons of energy. We got the game up-tempo like we wanted which made it an incredible first quarter for us scoring 50 points in the first half. You have to give Phoenix a lot of credit. We wanted to try to take their legs away from them and keep the game up-tempo as much as possible but they were the ones that made big threes in the fourth quarter. They made three straight threes in one stretch which I thought was the backbreaker. We can have better nights at the free throw line, we can have better nights in the mid-range game, but when you look at the stats and see that you outscored them in the paint by well over 20, you outrebound them by double figures and you hold them to less than 20 shots in the paint the whole night, man the game plan we thought was right, but that is a veteran, incredibly talented team that made the plays necessary to win a close game. We lost tonight and I feel like we won at the same time because we are starting some very special here and we look forward to the future.”

Phoenix Mercury Head Coach Sandy Brondello commented after the game: “I’m obviously very happy with the result. That first quarter wasn’t really what we had planned, but we knew Connecticut is a great young team. We knew they would come out with a lot of energy, they made a lot of shots. Once we got back to executing what we wanted to execute, we kept them to 33 points in the second half and that was big for us. Our shooting percentage went up and we had contributions from a lot of people and obviously, we have Diana Taurasi and she doesn’t lose an elimination, so that is a big thing. I thought Brittney (Griner) was way bigger in the second half. She got was getting deeper in the paint. The other parts of our team, I thought they played really well, Lelani Mitchell, Mo Currie, it was a really good game for her. Vonny (Yvonne Turner) and Camille Little does all the little things well. She made one shot, but she was so effective defensively for us and making us work at both end of the floor. I’m very happy with that and we will just prepare for the next game.”

See photos from the game below, or visit the gallery here for full-size images.