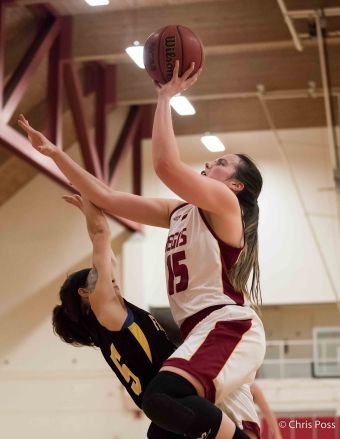 The Regis Pride battled back from an 8 point half-time deficit to beat the Framingham State Rams on a Brittney Stone bucket in the final 10 seconds of the game. Final score: Regis 83; Framingham State 81.

Brittney Stone led the Pride scoring 33 points with 18 rebounds and 5 assists. Sam D’Angelo scored 23 points with 6 assists, while Shannon Hayes and Maura Russell each scored 12 points in the victory.  For the Rams, Raegan Mulherin led all scorers with 37 points and 4 rebounds.

On December 18th, Brittney Stone was again awarded the GNAC Player of the Week for the third time this season.

The Regis Pride are now 2-0 in the Great Northeast Athletic Conference and are 4-3 overall having won their last 4 games. On Saturday, December 30th the Pride will take on Southern Maine, while the Framingham State Rams will next face York (Pa.) on December 28th.

See photos from the game below, or visit the entire gallery here for full-size images.